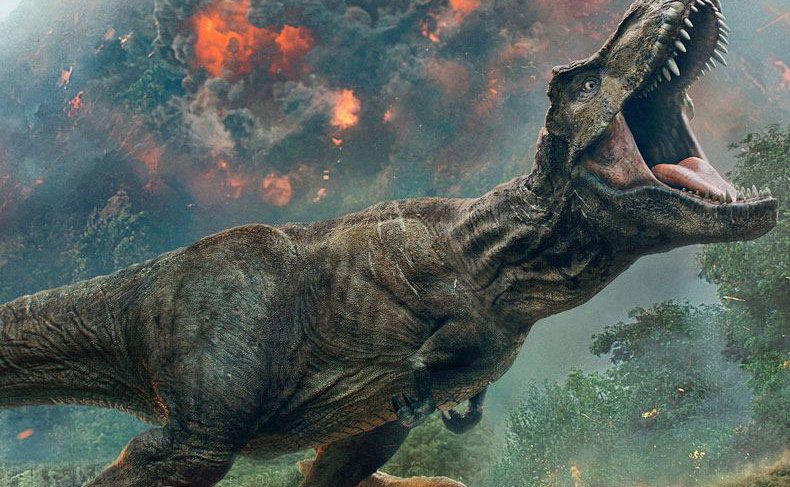 I wasn’t the biggest fan of Jurassic World. In fact, I thought it was pretty shite.  I’m qualifying that off the bat because I know that I seem to be out of step with general audiences on this one. If you’re looking for the point of view of someone who loved the first Jurassic World movie and want to know how the sequel stacks up, then I shouldn’t be your port of call. Don’t let me rain on your prehistoric parade. If you do decide to read on, take the following with the titanosauria-sized doses of salt necessary. What I dislike about the movie may have you punching the air with glee and I wouldn’t want to take that away from you, even if that were possible. With that in mind, whilst I won’t ruin any big reveals or surprises, this review will have some mild SPOILERS, so be warned if you want to go in completely blind.

So as a Jurassic World non-fan, what did I make of Fallen Kingdom? Eh- it was pretty much what I expected. Some elements were worse than the first one, some markedly better. First, a quick rundown. The site of the former Jurassic World, Isla Nublar, has been overrun by dinosaurs since the park ceased operations three years ago. The island’s supposedly dormant volcano has sprung back to life and it’s created an ethical conundrum – since humans brought the dinosaurs back from extinction, are we responsible for saving them? Former park director Claire (Bryce Dallas Howard) is firmly in the #SavetheDinos camp, having become an activist for dinosaur rights and looking to spearhead a rescue mission to save the creatures from their doom and move them to a sanctuary island far away. She must re-team with velociraptor trainer Owen Grady (Chris Pratt), who only signs on after finding out his most promising pupil, a raptor named Blue, is still alive and faces the same grisly fate.

Plotwise we’re in Lost World territory here. The basic idea of a sanctuary island away from the human world is explored in the 1997 sequel and it’s been dusted off for this one. It’s not the worst idea and it has to be said that it’s not like The Lost World is some unassailable classic that explored its ideas and themes to the fullest potential. Whilst the plotting is clumsy, it justifies going back to the island and getting involved in the dinosaur action, so that’s cool with me.

I was deeply underwhelmed by the pairing of Claire and Owen in the first movie and it has to be said that some effort has been made to flesh them out. Claire especially, who has gone from park director and stuffy business woman to activist, ditching her expensive high heels for more practical footwear (in case you don’t remember, Claire wearing high heels and tottering away from the T-Rex became a “thing” after the first movie was released).  I liked the fact that Claire took an active role in things and it made her more compelling as a character. It felt like her decisions were actually driving the plot instead of the other way around. Bryce Dallas Howard is still a great leading lady, but I keep feeling that she could be a lot more if the script allowed it.

Someone who also fits into the “hampered by the script” category is Chris Pratt. This is not the best use of your Pratt. He comes across as rather ill at ease with the badass ranger character he’s been lumbered with, only really managing to shine in the areas we already know he’s been effective in before. The man’s naturally likable, so having video footage of him training the adorably deadly baby Blue sells his relationship with the creature hard. I actually liked Blue this time round and the training vids were a big part of that.

There’s one short sequence where a tranquilized Owen has to lurch and flop himself away from some fast-approaching lava that was genuinely funny in a way that his dialogue wasn’t. As presumptuous as it may be,  I’m betting that the script said something like “OWEN struggles to get away from the oncoming lava flow” and whilst the physical slapstick and comedic reactions were always intended, it was an outline that enabled Pratt to run with it. My point being is that this was one moment the script couldn’t fuck up and it ends up being a great one because Pratt was allowed to do what he does. The lame written gags and bargain-basement action movie lines aren’t doing him any favours. I’m not saying Owen should be another wisecracking Star-Lord, but it does seem that they hired Pratt for a similar role (albeit with a more smoldering badass bent) and just suck at the execution.

I wasn’t completely convinced about the new blood. On the positive side, I liked Franklin (Justice Smith) and Dr. Zia (Daniella Pineda) . To be the sidekicks to the two clear leads is a tough job, but they both managed to hold their own and get a few good lines in. I will forever be a James Cromwell fan, so it was nice to see him as former Hammond business partner Sir Benjamin Lockwood – even if he actually doesn’t get to do all that much. Isabella Sermon also does well as Lockwood granddaughter Maisie, although I predict that her storyline will prove to be a contentious one. Don’t get your hopes up for Ian Malcolm’s return to the series either. His role is basically a glorified cameo that adds some series continuity but little else to proceedings.

The movie’s villains were a little too broad for my tastes. Toby Jones plays a scummy arms dealer who wants to sell weaponised dinos to the highest bidder and Ted Levine is the military jerk enlisted to accomplish that goal. Jones is at least having fun with his role, with ridiculous hair and teeth adding to his cartoonish villainy. Ted Levine on the other hand, a proven compelling and creepy bad guy, is boxed in as a mean army dude archetype seen in countless other movies. He has one weird and upsetting quirk, but outside of that, you could write his character on a napkin. Oh – there also a shadowy third baddie, which I won’t spoil here, but I’d imagine most of you will be able to guess who it is about five minutes after they’re introduced.

Fallen Kingdom is mostly a “meh”-worthy film with some great sequences peppered in. Director J.A. Bayona shows off his horror background with a genuinely unsettling opening sequence and a Nosferatu inspired scene in the third act that will no doubt be nightmare fuel for the kiddies in the audience. Dude has some serious visual chops and Fallen Kingdom has some truly fantastic and memorable imagery that will stick with you long after you leave the cinema. It’s tempting to say he’s too good for this material, but being a sucker for temptation I’ll say it anyway.

This is a minor point, but I thought that one of the things that all dinofans could agree on is the visceral appeal of somebody getting savaged by dinosaurs. The series has so many good ones, including the amazing T-Rex toilet death and Nedry’s demise in Jurassic Park, the raptor field sequence, the T-Rex tug-of-war and that bit where some mean dude gets mobbed by Compys in The Lost World and nothing from Jurassic Park III because I still hate that fucking movie and try my best not to think about it. I didn’t like the weirdly cruel death in Jurassic World, but it was at least memorable. In Fallen Kingdom, people just get munched. There are two notable deaths and one is weirdly bloodless and the other is just ripped off from The Lost World. I was genuinely disappointed in the levels of creative carnage on offer.

The story and the dialogue were disappointingly dumb, with some real eye-rolling moments, but this is a sequel to Jurassic World we’re talking about here. I’m not going to be rewatching it in a hurry but damn it, if I’m actually curious about the sequel teased at the end. It’ll be a real departure for the franchise can hopefully buck the series’ trend of rehashing old material . I think the sad realization for me is that I’m just not really a fan of these new Jurassic World movies. I love the original Jurassic Park, but the Jurassic franchise and I aren’t vibing any more. As I said, I’ll still see Jurassic World III, but I can’t say I’ve got high hopes for it.

Hello and welcome to this Franchise Fatigue? Episode of The Popcorn Bucket Podcast. This week we dive straight into the Wizarding World, and talk about the Harry Potter films. Plus, Ben is on his best and most polite behaviour. Please rate us on your podcast app of choice, and please follow us on Instagram @popcornbucketpod, on Twitter @popcornbucketpd, or on www.popcorn bucket.com. Email us at podcast@popcornbucket.com. With thanks as always to Laurence Owen of longcatmedia.com for the theme music.