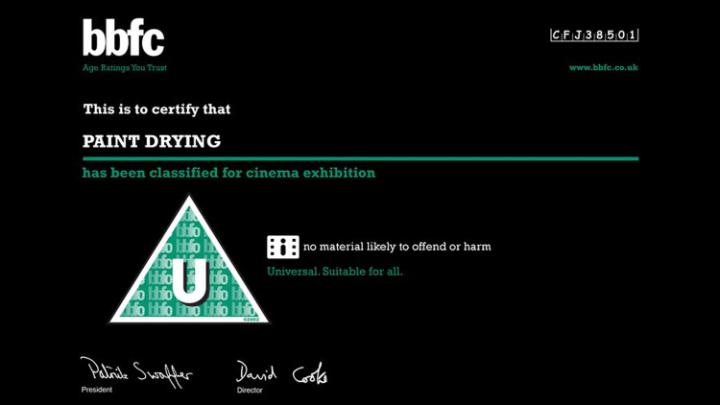 Ha, those crazy people on the Internet! You’ll never guess what they’ve gone and done now, the mentalists! They only Kickstarted a 10 hour film of paint drying, actually called Paint Drying, that the stuffy old British film censors have to watch. They, like, HAVE to watch it. Haha, what I wouldn’t give to be a fly on the wall when they do! I want to buy them all drinks, the absolute legends. Teehee!

You may have heard of the whole Paint Drying thing this week. Some douchebag crowdfunded a 1o hour long film of nothing but paint drying to protest the fact that every film that goes on sale in the UK has to pay for a mandatory classification given by the British Board of Film Classification (BBFC). This includes a submission fee and a per minute rate. Say your film is an average 90 minutes long, that would run you around £740 all in. Plus, to release something on DVD/Blu-ray, everything on the disc including featurettes and commentaries have to be similarly vetted, incurring additional costs. There’s also a bit about protesting the BBFC banning and censoring stuff on the Kickstarter page, but I’ll get back that in a minute.

The thing is, I half agree with the core principle of the matter. A submission fee and a per minute rate is fuck all to most studios, but it may harm smaller independent filmmakers from getting their stuff seen. It’s restrictive and rather exclusive.

However, that’s only if you want to be able to show it in cinemas and sell it nationwide. You can release it digitally for next to nothing (there will undoubtedly be server costs an’ shit, but they’ll be nowhere near the classification fee). If you’re a fan of physical media, you can get DVDs/Blu-rays printed yourself and also sell them via several sites. I could make a 70 hour film called Paint Drying 2: I Like The Colour, But I’m Not Sure I Want It In The Hall, host it on this here site and charge you poor suckers to download it right now if I wanted to. No BBFC involvement required. From what I understand, whether or not something can be shown in cinemas is down to the local authority anyway, like how Monty Python’s Life of Brian was technically banned in Aberystwyth until 2009.

I get that the campaign was to spread awareness, but what did it actually help? Most sites that picked up the story weren’t sure what the protest was actually about with this one saying that it’s anti-censorship and this one focusing on the prohibitive fees. Both of which have that sort of fuckawful “check this guy out!” tone exemplified by the opening of this article. It’s been largely written about as a kerr-azy prank and the original meaning, as confused as it may have been, was buried under how fucking “random” it was. Plus, the BBFC people got paid to do their job, just like they are every day. I’m sure that fucking stung ’em. I’ve sat through some crusty toss as a reviewer, I’m sure they’re completely battle-hardened by now.

What about all that talk of banning and censoring? Well, here’s a list of films banned in the United Kingdom. I think you’ll agree it’s a pretty small list. Now, whilst I’m against censorship in all forms and I believe that adults should be able to watch My Daughter’s a Cocksucker if they want, I really don’t think it’s that much of a deal. The BBFC is one of the most transparent and reasonable film boards going. For starters, they’re a hell of a lot better than America’s MPAA, who still seem to bump up ratings if there’s even a hint of homosexuality. If you haven’t seen the eye-opening documentary This Film Is Not Yet Rated, I urge you to do so.

The BBFC haven’t always been as decent. There were the infamous “video nasties” in the ’80s and they had a proper moral crusade going right up until around ten years ago. In the early 2000s they had an especially weird issue with headbutts. Star Wars shitquel Attack of the Clones risked being pushed from a PG to a 12 purely because of one scene where bounty hunter Jango Fett gave Obi Wan Kenobi a Glaswegian kiss. They’ve thankfully knocked that shit off since and fictional people can headbutt each other without fear of the censor’s scissors.

If I have any problem with the BBFC, it’s how studios use them. There’s a fairly recent trend of studios asking the BBFC for advice on how to get a desired rating for their films. The Hunger Games films, Spectre, The Maze Runner films, A Good Day to Die Hard, The DUFF and countless others have all been rated something higher than the broadest audience, money-making 12A certificate and have gone to the BBFC for help trimming their shit down. Like you needed any more proof that artistic integrity was the rarest thing in Hollywood. Their BBFC entries all say the same thing: “During post-production, the distributor sought and was given advice on how to secure the desired classification. Following this advice, certain changes were made prior to submission”.

I’m fine with these things being cut for cinemas in certain cases. It would have been dumb to release of version of The Hunger Games into cinemas which the built-in preteen fans of the books couldn’t see. It makes sense for certain films to have a lower rating for their theatrical release.

What it all comes down to is choice. When it comes time to release your film on shiny disc, give us options. The Hunger Games had 12 and 15 rated editions, as did The Maze Runner. A Good Day to Die Hard also had a harder, extended cut when disc time rolled around. However, this is not the case across the board. Spectre will not have a meatier cut on DVD/Blu-ray when it’s released in late February. Now, granted it would take a lot more than a few nastier action sequences to make that fucking facepalm work, but it would be a start.

So yeah, to return to my original point- fuck Paint Drying. Just think- the money raised could have put at least five proper films through certification. Right, I’m off to set up a Kickstarter to paint my arse blue and wave it around Pinewood Studios to protest the lack of an uncut version of Spectre on Blu-ray. See you on The LAD Bible. Wahey!

Hello and welcome to the latest One Shot episode of The Popcorn Bucket Podcast. This week, to pause in our Mission: Impossible coverage we take a look at the main man himself, Tom Cruise. So we Few Good Men take a Firm look at the films of the Legend, the man Without Limits that is Tom Cruise. The Others might think it seems a Risky Business, but can we handle the Cruise? Pour yourself a Cocktail to find out. Born on the Fourth of July. Please rate us on your podcast app of choice, and please follow us on Instagram @popcornbucketpod, on Twitter @popcornbucketpd, or on www.popcorn bucket.com. Email us at podcast@popcornbucket.com. With thanks as always to Laurence Owen of longcatmedia.com for the theme music.