I know. Fuck, I didn’t want to have to write this for a good long while yet. I loved Alan Rickman. Tons of people did. He was an amazing actor who just seemed to be an agreed-upon thing. Being the type of person to seek out or instigate discussion about films and/or actors, I’ve heard some surprisingly vitriolic spiels about who I thought to be universally beloved people. It says a lot that I’ve never heard anyone say a bad thing about Rickman.

So, again, I feel I must celebrate the man’s work in my own dumb way. I rewatched Anthony Minghella’s Truly, Madly, Deeply to remind myself of a subtler turn by Rickman before I realised the folly of doing so. I definitely recommend the film and his performance in it, but that’s not who Alan Rickman was to me. The fact that I could barely remember anything about it was a clue. Let other sites dogmatically talk about “The Definitive Rickman Performances” or “Every Rickman Movie- Ranked!”. Instead, all the roles listed below are straight from memory- no rewatching or research required. These are all films I’ve seen countless times and all occupy special places in my brain.

Die Hard has a huge legacy. It’s been imitated but rarely, if ever, improved upon and it gets better with age. It’s a fucking masterpiece in my eyes and I don’t think I’m overstating things. A good chunk of the film working can be attributed to the villainous Hans Gruber. Pre Die Hard, there had of course been Euro villains. There had been raving psychopaths who couldn’t give a squirt of piss about human life too. Gruber was a newer, smarter breed of baddie that incorporated those qualities and more. His role required actual acting. That sounds like a knock against most action movie baddies, but Gruber’s whole thing was deception. He and his goons take over Nakatomi Plaza under the pretense of some lofty political statement, but their motivations boil down to a bog standard down and dirty cash grab.  Rickman is masterful in the role. He took lines that would have more than likely clunked out of other actors’ mouths and made them quotable brilliance. His casual quip about the recently murdered Mr. Takagi not joining them “for the rest of his life” is superb.

Defining moment: When Gruber gets caught sneaking around by McClane, affects an American drawl and pleads for his life. McClane, only having heard Gruber’s Germanic tones over the walkie-talkie believes him and advises that they stick together- the tension always building as to when Gruber was going to reveal his true self, especially when McClane hands him a pistol for protection. 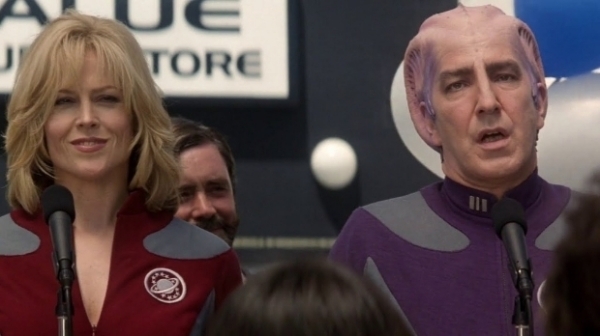 Never will you find a warmer spoof than Galaxy Quest. It’s a smart, incisive and affectionate parody of Star Trek. Rickman plays serious theatre luvvie Alexander Dane, who in a take-off of Leonard Nimoy’s “I Am Not Spock” phase, hates the fact he’s known as Dr. Lazarus, a part he considers well beneath him. Rickman’s dry humour is perfect for the role and Dane’s hatred of the part and his “stupid line”. His flat, eye-rolling delivery of “By Grabthar’s hammer…what a savings!” at a low key superstore opening fucking slays me every time.

Defining moment: When Dane realises that his “stupid line” is more than just about him and speaks it to a fallen friend as a comfort. It’s genuine, earned and rather touching.

In a bit of inspired casting thanks to his instantly recognisable tones, Rickman was tapped to play the Metatron, an angel tasked with being the voice of God, in Kevin Smith’s Dogma. Dogma is my favourite of Smith’s movies and to my mind, the best written. Many of the characters get extended monologues and they’re golden. The Metatron is no different. I love his fiery entrance and opening speech which gets interrupted by Bethany dousing him with an extinguisher. After things calm down slightly, we get this great exchange, delivered in the way only Rickman could do:

BETHANY: What are you?

METATRON: I’m pissed off is what I am! Do you go around drenching everybody that comes into your room with flame-retardant chemicals? No wonder you’re single.

Defining moment:  A revelation hits home the enormity of Bethany’s holy mission and she ends up in on a riverbank- cold, wet and defeated. The Metatron appears, walking on water towards her and explains the situation. She sobs that she doesn’t want any of it and that the task is too big, to which the Metatron replies that Jesus said the same thing. He tells her about coming down to Earth to tell a scared child he’s the son of God and will be persecuted and crucified by the very people he’s trying to help. It’s a beautifully written moment and both Linda Fiorentino and Rickman sell it perfectly.

Robin Hood: Prince of Thieves – The Sheriff of Nottingham 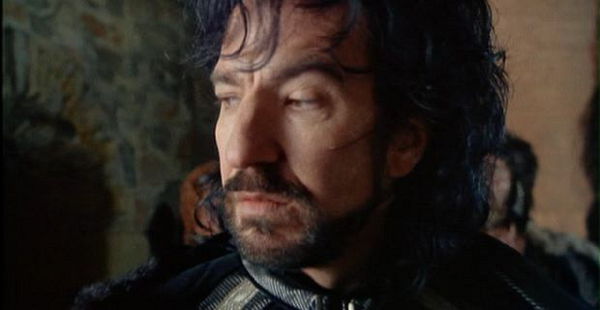 Robin Hood: Prince of Thieves is pretty mediocre. It’s inoffensive enough, but having the supposedly rakish and dashing Robin Hood being played with bland indifference by Kevin Costner puts a cap on the fun you can have with it somewhat. Thankfully, Rickman is playing the Sheriff of Nottingham like he’s in a different film altogether, chewing on scenery and snarling out genuinely funny one-liners. He and Morgan Freeman seem to be the only people actually having fun. Rickman’s so great, his performance elevates the entire film. He ends up walking away with the whole film tucked under one arm and I love him for that.

Defining moment: A lot to choose from, but dictating the following to a scribe is pretty fucking delicious:  “Cancel the kitchen scraps for lepers and orphans, no more merciful beheadings and call off Christmas” As is this bit below:

Yeah, there was no way this wasn’t going to appear on this list. The Harry Potter films were massive and Rickman’s portrayal of ostensibly evil Potions master Severus Snape is genuinely great. He appeared in all eight films and was a fantastic presence throughout. Casting career baddie Rickman as the not-quite-what-he-seems teacher was a masterstroke. I’m happy that he played a role that would impress on children how awesome he was. I saw a lot of snark online the day he died, calling out kids for only knowing him as Snape. So fucking what? If they enjoyed him as youths, they may be open to exploring his back catalogue as they get older. They may stumble across some of the films detailed above and like them as much as I do. Who even cares anyway? Snape is the definitive role for Rickman and it’s what he’ll be mostly remembered for. To be honest, it’s a hell of a legacy to leave behind.

Defining moments: As there are eight films, I allowed myself two moments. One is the end of series flashback that you all must know by now.

DUMBLEDORE: “After all this time?”

Secondly, it’s his flamboyant and angry entrance to his Potions class in Prisoner of Azkaban. He strides past the class, slamming the window shutters closed with his wand, pulls down a screen and says “Turn to page 394!”. I’ll admit that it’s not the most amazing line to justify an entrance like that, but that’s what I love about it. Snape could be an intimidating bastard, but also had some camp value to him, making him a character that played to Rickman’s strengths.