First new post to appear on here. Annoying thing is I’d already done this review, but Blogspot up and deleted my hard-typed work on a whim. Hand feeling forced, I decided to move here. I quite like the neighbourhood. Charming little shops. Does anyone know when the bins are collected?

Harry Potter and the Prisoner of Azkaban (2004) 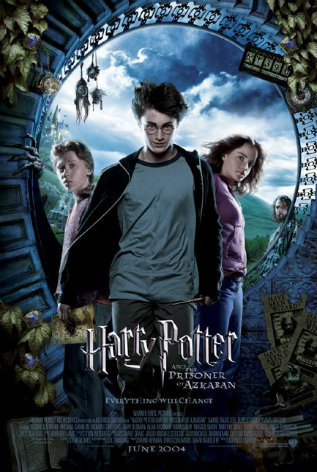 Having dealt with the “worst Potter ever”, it’s now time to tackle the one that is usually considered the best. Azkaban certainly marks a turning point in the series. Chamber of Secrets was the last of the “Golly gee whiz, guys! There’s a spooky mystery to solve! Let’s save the school and get 50 points for Gryffindor!”-type films and with Azkaban we move into the darker realms of Harry’s world. It also marks a change in director, moving away from the family-friendly Chris Columbus to Mexican quirkster Alfonso Cuarón- then only known for the great Y Tu Mamá También, but who would go on to direct the fantastic Children of Men. Also, before I go any further, this review does contain spoilers. So consider yourself warned if you’ve just recently relocated from a cave and haven’t read or seen any Potter stories.

“Harry, there are some within the Ministry who would strongly discourage me from divulging what I’m about to reveal to you, but I think that you need to know the facts. You are in danger. Grave danger.”

Entering his third year at Hogwarts, Harry Potter (Daniel Radcliffe)  returns to the wizarding world to find everyone all cowed and nervy over the escape of convicted murderer Sirius Black (Gary Oldman) from the supposedly inescapable prison of Azkaban. Harry is also (obviously) rejoined by Ron (Rupert Grint) and Hermione (Emma Watson). Since Hogwarts goes through Defense Against Dark Arts teachers like Taylor Swift goes through famous fellas, new recruit for this year is shabby lovely Remus Lupin (David Thewlis). On the subject of new additions to the cast, both Emma Thompson and Timothy Spall join the regular line-up. Prisoner of Azkaban has the most twisty-turny plot of all the Potters. It’s a satisfying mystery that works primarily thanks to the omni-present threat of Sirius Black. There’s a real sense of foreboding that matures up the atmosphere considerably from the first two films. This is the first film where you truly feel that Harry is out of his depth, especially with the  adverse effect the creepy fucking Dementors (basically floaty anorexic Ringwraiths) have on him. There’s more at stake this time too, with Azkaban being the most emotionally charged film so far.

Daniel Radcliffe is still a problem. I hate ragging on the guy as he does get better in later films and actually seems like a cool person in interviews and the like, but he really struggles with the material here. Prime example is the scene where he finds out Black is his godfather and he betrayed Harry’s parents trust and sold them out to Voldemort. Still hidden by the invisibility cloak, he runs away only to sit down outside sobbing in the snow. It should be a powerful, touching scene but the combination his crap crying and following unconvincing anger kills it stone dead.  His eventual confrontation with Black also suffers, but any actor is going to struggle sharing a scene with David Thewlis, Alan Rickman and Gary Oldman. Both Emma Watson and Rupert Grint are the best they’ve been so far too- especially Watson who gets the chance to step out of the precocious know-it-all boots she’d been occupying since the series began. Hermione getting to finally thump Draco (Tom Felton, who has gone from genuinely funny to whiny and puny) is a great moment and Watson’s guilty pleasure after it is well-played. Obviously, Gary Oldman is the don. He gets to play the sort of maniac he’s made a career out of and it works fantastically well.  After revelations and the truth outs, his shift from psychopath to potential father figure is expertly done and doesn’t jar in the slightest. David Thewlis makes a great Potter mentor too. He’s like a favourite shambling uncle that you love seeing. Emma Thompson also gives good teacher as the ethereal Professor Trelawney, wearing the thickest glasses I’ve seen since From Russia With Love‘s Rosa Klebb.

Prisoner of Azkaban is the first film to really open up Potter’s world. Both Philosopher’s Stone and Chamber of Secrets were very much focused on the microcosm of Hogwarts itself. Whereas in previous films, the school contains the threat, in this film Hogwarts becomes a sanctuary (albeit an easily infiltrated one) from the scary outside. I think the reason people like it so much is the fact that it sets the tone for the rest of the series, with the first two films as charming family-friendly anomalies.

So, apart from the actors, what else is decent? Well, most of it. Set pieces are well handled. The effects better than they’ve ever been and the John Williams music also reaches a series best. One of my favourite scenes is Lupin’s class on handling a Boggart, a shape-shifting creature that turns into the thing you fear the most. Laugh as Neville forces Boggart-Snape to wear his grandmother’s clothing! Shiver as Ron conjures up a fucking great spider! Get confused as Parvati changes a massive snake into an even more terrifying clown jack-in-the-box! Prisoner of Azkaban also features one of my favourite Snape moments ever. Just check out this needlessly dramatic and flamboyant entrance and tell me he’s not awesome:

Keeping an eye on Quidditch- Harry fails to have a normal game this time too, thanks to the Dementors and a whacking great fall. He also gets his broom smashed up. He does get to wear a fetching pair of goggles though and there’s a cool little moment where he sees “the Grim” in the stormy clouds.

“That is the second time you have spoken out of turn, Miss Granger. Tell me, are you incapable of restraining yourself, or do you take pride in being an insufferable know-it-all?”

I love Prisoner of Azkaban. It tells a complex, dark story and establishes themes and characters that carry on into the succeeding films. For once, the drooling twats that make up the majority of the infuriatingly opinionated general film watching public are completely right. It really is the best one.

One thought on “Harry Potter and the Prisoner of Azkaban”